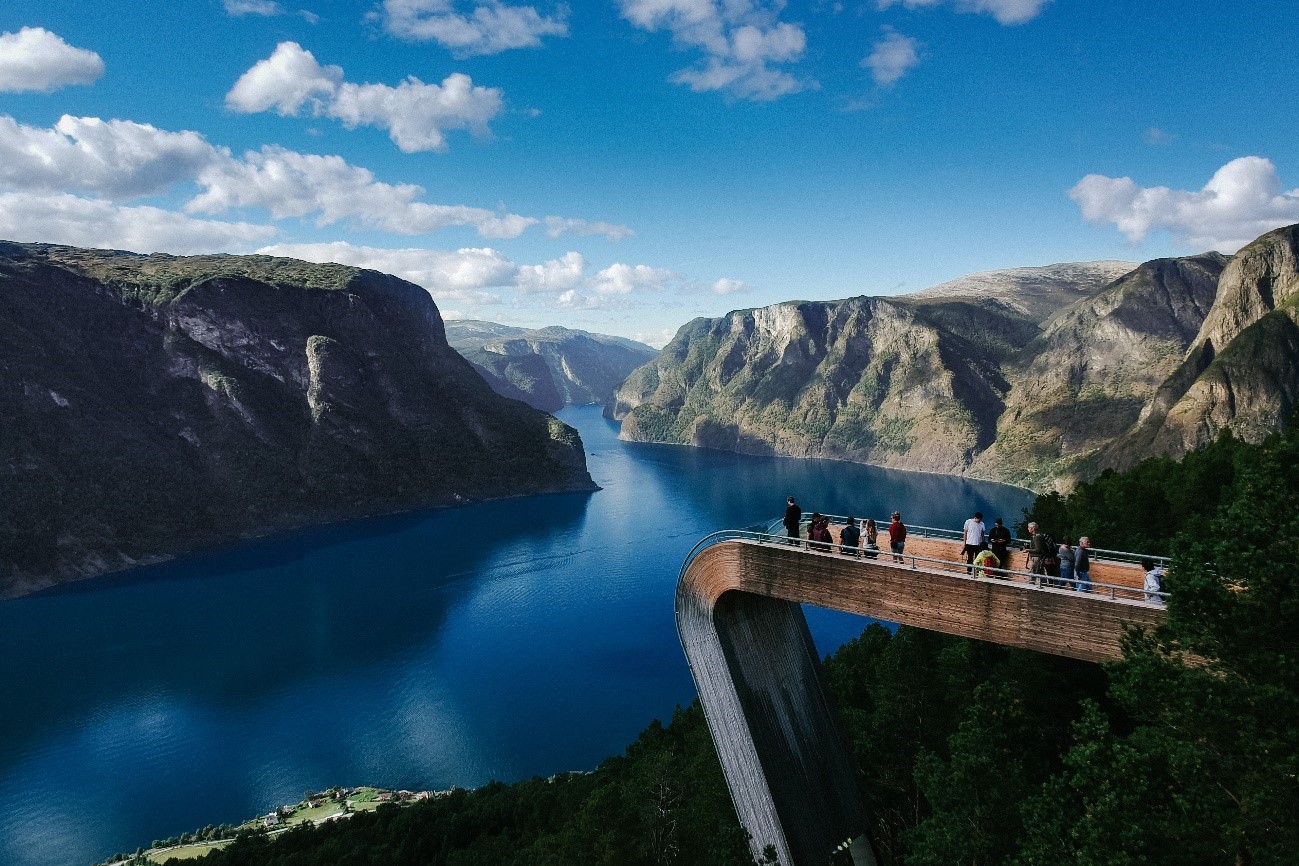 The main challenge in Aurland was that many residents moved to other municipalities, and this was combined with low growth in the local economy and fewer job opportunities. After the severe depopulation of the early 2000s, the trend reversed towards the end of the decade. Especially after 2015, Aurland has a large population growth, in stark contrast to many other Norwegian municipalities in rural areas. In recent years, there has also been a positive development in the number of jobs created. Figure 5 shows the demographic and job development in Aurland since 2000.

Aurland has a long history in terms of tourism. With several well-known natural and cultural destinations in and around the municipality, the tourism industry has been central to Aurland's turnaround in recent years. 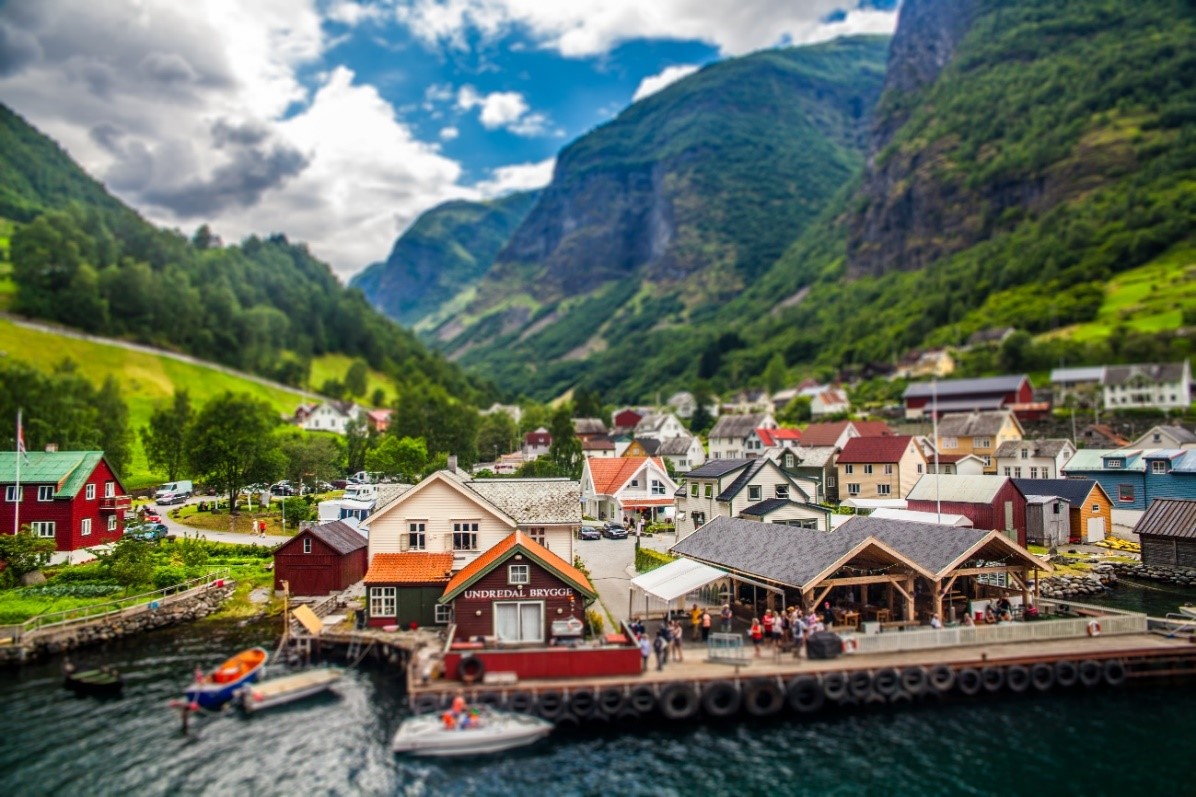 Today, more than a million tourists visit Aurland every year. Aurland is home to popular leisure trails for cyclists, a scenic railway line and a national scenic motorcycle route. The fjords around Aurland are a UNESCO World Heritage Site and a popular destination for cruise ships. The port of Aurland is one of the busiest for cruise traffic in Norway, with over 150 ships and nearly 300 passengers arriving each year - a challenge in itself. Ninety percent of cruise tourism takes place between May and September. However, all these tourists do not necessarily create local growth.

Aurland managed to turn the negative spiral into a positive trend with population growth, business and the number of jobs created. Ironically, today the biggest challenge for the municipality is to cope with the growth associated with positive development in recent years.

3.2 Activation of local potential - who and what

Aurland had to activate natural landscapes and heritage to create the desired growth.

3.2.1 The role of the municipality

When we asked people who know the municipality well who are the main participants in the positive development that has taken place in recent years, they pointed out the importance of the political and administrative leadership of the municipality in the late 80's and 90's. Then the municipal council adopted long-term development goals and plans and established strategic alliances with its counterparts in neighboring municipalities, with the political and administrative level of the regional government (district administration) and with other key players in organizational and business life in the region.

In other words, although positive results have only been achieved in recent years, much of Aurland's success can be attributed to the systematic and long-term work to achieve certain goals, despite several changes in political leadership in the process.

Through plans и Strategy the municipality of Aurland has taken on the role of coordinator and organizerto use the potential of the natural and cultural values ​​of the region. The Municipal Plan of the Municipality (adopted in 2009) was created through an in-depth, knowledge-based and systematic planning process. Through this process, they identify two main strategic focuses: 1) business development and 2) LA21[4] and sustainable community development. These priority areas are also the basis of the Municipal Business Development Plan, as well as several local action plans. Regarding business development, the local strategy is primarily to strengthen and further develop the two largest industries in the municipality, namely agriculture and tourism. In other words, the strategy is to build on existing local knowledge and resources.

A key strategy for the development of Aurland as a tourist destination was the creation of a local development company called Aurland Resources Management. The company is owned by the municipality and the local bank through a public-private partnership and has several affiliated companies that operate and develop many of the attractions, activities and services for tourists visiting Aurland.

Efforts to extend the tourist season, coordinate the development of more activities and services in order to keep tourists longer, better cooperation between local actors in the sector and sustainable development of the region were highlighted by our informants as key criteria for the success of the achieved growth. The dimension related to sustainable development is also essential for the protection of the values ​​of the natural and cultural heritage in the region.[5] The development company plays an important role in undertaking of these initiatives и coordination of the processes.

In 2005, the fjords of Western Norway were included in the UNESCO World Heritage List. The rationale was that the fjord landscapes in Western Norway are among the most beautiful and best-preserved fjord landscapes in the world and that the area is rich in small farms, stables and fishing facilities that show cultural values ​​associated with use. of natural resources. The area, included in the World Heritage List, consists of two parts: Geirangen Fjord and Neroy Fjord. Aurland is part of the second. There is good reason to believe that the World Heritage status achieved in 2005 has enhanced the region's attractiveness.

Nerjoy Fjord Park - World Heritage Site Foundation[6] was established in 2008 by the four neighboring municipalities of Aurland, Lerdal, Vic and Vos and the Sogn og Fjordane district administration. This is the first Norwegian regional park initiative. The purpose of the park foundation is to exert a stronger local influence on the development of the Neroy Fjord part of the World Heritage List site. The aim is to combine protection with development, thus achieving local growth and value creation. Therefore, the concept of the park is a method of creating growth. Today, the Nerjoy Fjord Park, a World Heritage Site Foundation, includes partners from government, agriculture and other economic activities, as well as local people and volunteer organizations committed to promoting World Heritage values ​​through sustainable development. The partnership is regulated by a joint partnership agreement.

In an assessment of all regional parks in Norway, the Nerjoy Fjord Park - a World Heritage Site Foundation has been identified as a good practice. The evaluators point to the fact that the regional park has managed to build cooperation between local and regional public and private actors beyond the traditional boundaries of the sector, which in turn has laid the foundation for a long-term vision, clear priorities and concrete efforts to strengthen local competence and capacity. creating value over time. It is especially emphasized that the concept of the park is a successful model for organizing the broad but free union that already exists in the region. This method is also associated with major changes in agriculture in recent years, in which small-scale multi-production agriculture, as we usually find in this area, is losing ground to large-scale / volume production. Therefore, small local farms had to look for new business opportunities. Thus, they discovered the possibilities of tourism in an area with the status of especially valuable natural and cultural landscapes.

In other words, the park foundation is an important way to raise the relations of cooperation to a new level in order to accelerate the more stable and systematic development of the region. The cooperation through this partnership laid the foundations for closer cooperation between the various actors as a whole and between the municipalities and the district administration.

In Aurland, a business garden has been established as a utility within the business development aspect of the Park - a World Heritage Site. Its aim is to be the organizer and coordinator of the joint use of the sites and the cooperation between the companies in the region of Aurland. In addition, the business garden contributes by providing local businesses and local industry with access to competence by building a professional and social environment for innovation and entrepreneurship.

3.2.5 Use of networks and alliances

The SAKTE Alliance[8] is an important initiative created by the local business garden. SAKTE, which in Norwegian means 'slow', is a project to develop a local brand and product and unite the label of local actors in the field of local food and beverages, arts and crafts and environmentally friendly entertainment. What all members have in common is that they have deep roots and are loyal to this World Heritage Site. The main goal of the SAKTE Alliance is to strengthen the competitiveness of the members in the tourism industry, which registers a stable growth in the number of tourists and is characterized by large professional participants. In addition, their aim is to make the care of nature and cultural values ​​commercially attractive in order to achieve sustainable tourism. They work to build the reputation of the Nerjoy Fjord as the Norwegian Mecca of local food and experiences.

In order to become members and use the SAKTE brand in their marketing, companies must accept and adhere to values ​​and quality requirements related to sustainable tourism, the World Heritage Site and the philosophy of the slow food movement.[9]

Infrastructure and transport are important for the development of the tourism industry. In alliance with the neighboring municipalities, the district administration and the local business, the municipality of Aurland works hard to maintain and develop the existing infrastructure and to build new and more modern and efficient transport routes.

An example of this is the Gudwanga tunnel through Aurland, completed in the early 90s, which provides the first year-round ferry route between east and west and between Norway's two largest cities, Bergen and Oslo. This was an important event for Aurland, which gave impetus to huge investments in local trade and tourism.

Another example is local efforts to save the future of the Flam railway. The government wanted to close the line back in 1998. So a group of local actors, led by the municipality of Aurland, set up a local company that took responsibility for operating, developing and advertising the Flam Railway. It is safe to say that this is a real success and has great value for local tourism with more than 800 passengers a year. The Flam Railway is often mentioned among the most picturesque and spectacular train journeys in the world, offering panoramic views of some of the wildlife that Norway has to offer.

Norway's industrialization in the early 20th century created enormous energy demands. Since then, hydropower (electricity from water) has been part of Norway's history. Aurland is one of the largest producers of hydropower in Norway, which provides the municipality with large revenues from local taxes.

The revenue goes to a local business development fund owned by the municipality (most Norwegian municipalities with hydropower generation have such funds). The fund has a council of elected representatives from the various political parties represented in the municipal council. The mayor of the city is chairman of the council. Local participants can apply for grants for projects aimed at business development or attracting new residents.

It is debatable whether this type of grant is a catalyst for new development projects or mainly helps to implement non-commercial projects. Surveys of municipal business development funds in Norway generally find that they contribute in particular to strengthening or securing existing jobs, local businesses and entrepreneurs. The funds have also helped make these municipalities more attractive as tourist destinations, as places of residence and as places for business activities. However, they appear to have a limited effect on settlements and migration flows beyond helping to maintain existing settlements - again by supporting already established enterprises.